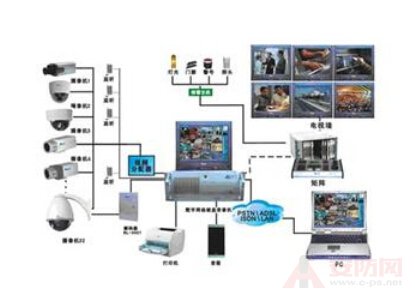 1. Wood-grained interference <br> The occurrence of such interference does not overwhelm the normal image when it is slight, and the image cannot be viewed (or even destroys the synchronization) when it is severe. The causes of such failures are more complicated and complicated. There are roughly the following reasons:
(1) The quality of the video transmission line is not good, especially the shielding performance is poor (the shielding net is not a good quality copper wire mesh, or the shielding mesh is too thin to prevent shielding). At the same time, the line resistance of such video lines is too large, which causes a large attenuation of the signal, which is also a cause of aggravation. In addition, the characteristic impedance of such video lines is not 75Î© and the parameter is out of specification is also one of the causes of failure. Since the above-mentioned interference phenomenon is not necessarily a failure caused by a bad video line, the cause of such a failure is accurate and prudent in judging. Only when the other possibilities are excluded can we consider from the perspective of the video line. If it is really a cable quality problem, the best way is to replace all of this cable and replace it with a cable that meets the requirements. This is the best way to solve the problem completely.
(2) Due to the fact that the power supply of the power supply system is not "clean". The power source referred to here is not "clean", which means that an interference signal is superimposed on a normal power source (a 50-sine sine wave). The interference signals on such power sources are mostly from devices using thyristors in the power grid. Especially for high-current, high-voltage thyristor equipment, the pollution of the power grid is very serious, which leads to the power supply in the same power grid is not "clean." For example, there are high-power thyristor frequency modulation speed regulation devices, thyristor rectifier devices, thyristor AC/DC converters, etc. in the power grid, which will pollute the power supply. The solution to this situation is relatively simple, as long as the entire system is powered by a clean power supply or an online UPS.
(3) There is a strong source of interference near the system. This can be judged by investigation and understanding. If this is the case, the solution is to strengthen the shielding of the camera and ground the pipeline of the video cable.
2. Deeper and more chaotic large-area reticulation interference <br> In severe cases, the image is completely destroyed, and the image and synchronization signal are not formed. This kind of failure is caused by short circuit and open circuit of the core wire of the video cable and the shielding net. This is often the case with BNC connectors or other types of video connectors. That is to say, when such a fault phenomenon occurs, it is often not a problem of the signals of the entire system, but only the number of paths in which the joints are not good. As long as you carefully check these connectors one by one, you can solve them.
3. A number of vertical bars with equal spacing <br> The frequency of the interference signal is basically an integer multiple of the horizontal frequency, which is caused by the impedance mismatch caused by the characteristic impedance of the video transmission line being 75Î©. It can also be said that this interference phenomenon is caused by the fact that the characteristic impedance and distribution parameters of the video cable are not in compliance with the requirements. The solution is generally solved by the method of â€œstarting series resistorâ€ or â€œterminal paralleling resistorâ€. In addition, it is worth noting that when the video transmission distance is short (usually within 150 meters), the above-mentioned interference phenomenon may not occur with the video cable having the above-mentioned impedance mismatch and excessive distribution parameters. The fundamental solution to the above problem is to ensure quality when purchasing video cables. The cable should be sampled if necessary.
4. Space Radiation Interference Introduced by Transmission Lines <br> This interference phenomenon is mostly caused by strong, high-frequency spatial radiation sources in the vicinity of the transmission system, system front end or central control room. One solution to this situation is to understand the surrounding environment when the system is established, try to avoid or keep away from the radiation source; another method is to strengthen the shielding of the front end and the center equipment when the radiation source cannot be avoided. The pipeline of the transmission line is made of steel pipe and well grounded.

Reflective Glass(coated glass),also known as heat-reflective glass(solar-control coated glass),is plating on high-quality Float Glass surface with a vacuum magnetron sputtering ws0ay to multi-layer metal or compounds coating. It can control the direct solar radiation reflection, transmittance and absorption by the ratio to reach the needed reflective color. The development of architectural aesthetics arouses high requirements to the architectural glass on lighting with appropriate sight shielding, energy-saving with decoration, which could be realized by reflective glass.